Robin Lawson Played in our Backyard! 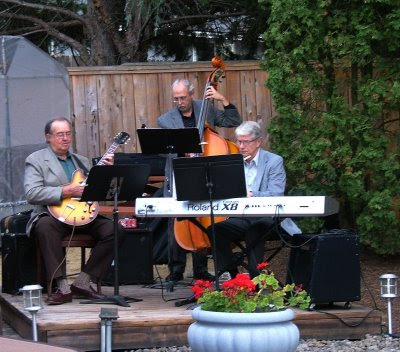 My story may be unique to you, but it’s not unique to many who live in my valley. Many would say that their life is richer from knowing a great man, Robin Lawson, who left this world on Sunday at the young age of 70.
Â
Robin Lawson played music in our backyard – twice! Once, for my husband’s 30th surprise birthday party, and a few years back, for this party.
Â
Both times I surprised my husband as I hired Robin’s jazz trio to come and play – adding beautiful ambience to the parties that even our neighborhood could enjoy, listening in over the fence.
Â
I remember the night of this party, Robin sitting off to the side with Jim and Lyle, each devouring a plate of dinner that we saved for them.Â
Later, at our son’s piano lesson, Robin told me that this party was one of the most meaningful “gigs” he had ever done. Â He went on and on about the people, the food, the purpose – the night!
Â
That was a HUGE compliment to me, the hostess, but also to my husband’s message and the celebration of the night, as Robin and his partners listened in. I know we aren’t special. I know we are one of probably thousands of families touched by this man’s life.
Â
Robin was a brilliant musician. For over a year our son Elliot took jazz piano lessons from him. And then Elliot decided he was finished with piano. He just quit (frustrating for the parents, right?). Â Now, five years later, Robin Lawson’s influence has been resurrected in our son’s musical abilities. Â He’s venturing out in all directions with his piano playing – the latest in jazz, inverting chords and playing by ear. He just learned Billy Joel’s Piano Man, adding a touch of jazz to the beginning.
Â 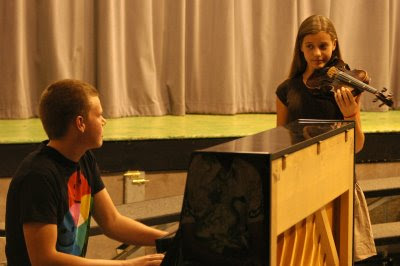 We took our son to a concert at the Ginger Rogers Theatre, where Robin performed with his wife and many other valley musicians. What’s remained in my mind was more than Robin’s music, but also the love shown toward his wife that radiated through the entire evening.Â For some reason I always pick up on those vibes. Â
I like to know there is harmony in the individuals behind the performance and the popularity. I like to know that people are real and their priorities are in balance.
Â
I had to call Elliot yesterday and tell him that the world lost a great man. There was silence on the other end. Then Elliot started telling me all he had learned from his teacher, and his enjoyment of his English accent.
Â
We always talked about having Robin and his lovely wife Pam over for dinner. But we never did. That is something I now regret.
Â
But at least we have his influence.Â
Influences never leave us, do they?
Â
Has any musician touched or influenced your family?
(Winner of the Briefcase BBQ – Fiona!)

We are a participant in the Amazon Services LLC Associates Program, an affiliate advertising program designed to provide a means for sites to earn advertising fees by advertising and linking to amazon.com.

Don’t miss a thing! get new posts via email:

8 Comments on “Robin Lawson Played in our Backyard!”

Welcome to my home and table! I'm Sandy—lover of food, family, cooking, THE BIG BOARD, travel, and bringing people together. Feasting on Life begins the moment we open our door (and hearts) to hospitality, wherever we are. Through great recipes and connection around the table, we become better, stronger, and more courageous people. Feasting on Life is real, and every time we do it, we grow a little more.

Don’t miss a thing! get new posts via email: