This Easy Pear Potato Soup is a delightful soup to serve at a Downton Abbey dinner party! Even better made with Five Spice flavor and creme fraiche. Enjoy this surprise visit to Downton Abbey in England! 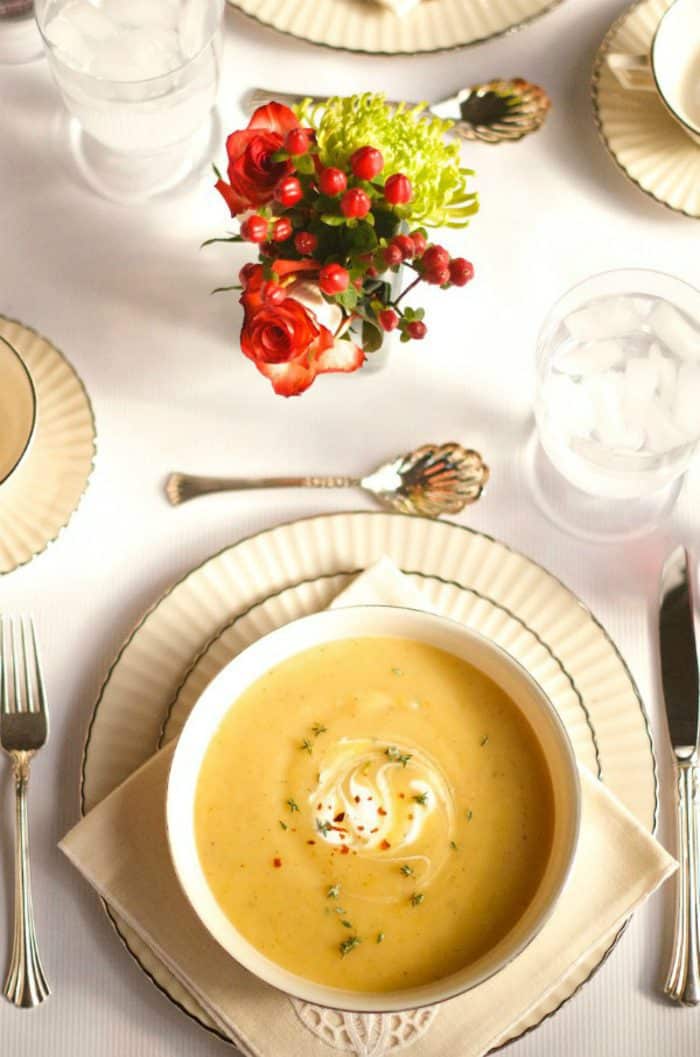 Friends, I am in London this week! It’s been quite the journey, but fun so far. I’ve been invited to visit London with Grey Poupon, who’s sponsoring my trip, in celebration of Downton Abbey’s 6th and final season. 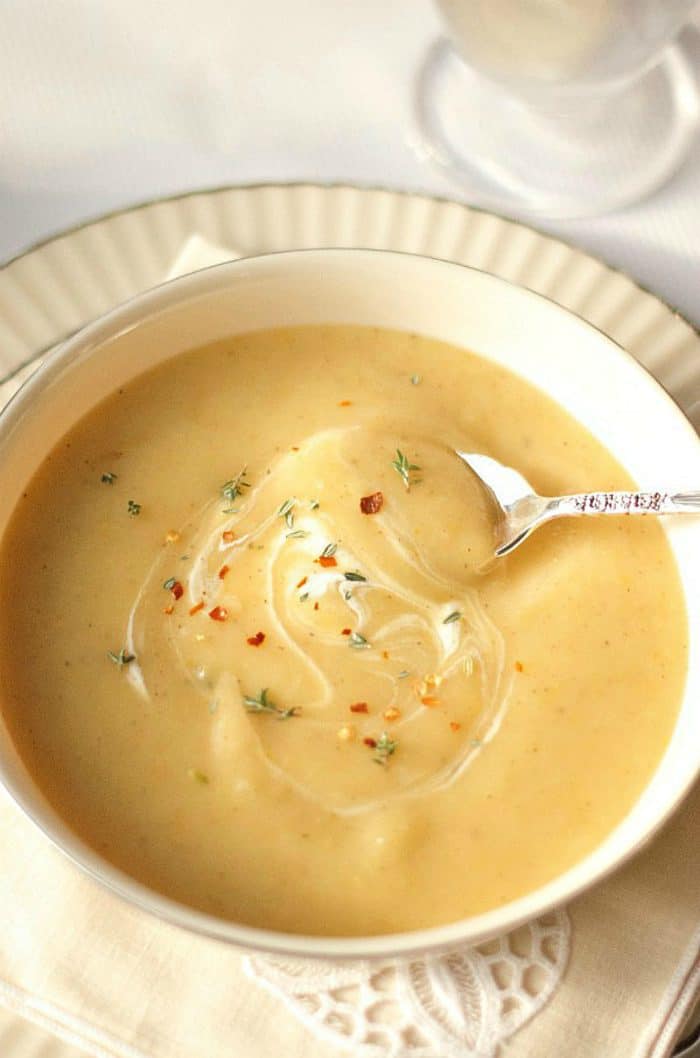 Follow along as I share this delightful, simple Pear Potato Soup Recipe. It’s so good, easy for a Downton Abbey dinner party, or just lunch or dinner.

The leaves have changed here already, it’s rainy and cool (I bought a new raincoat), the streets are hustling and bustling with people, and my friend Lori (RecipeGirl) and I are soaking it all in. It’s been 8 years since I’ve been to London. You can also check out RecipeGirl’s recipe today: English Sausage Pastries. YUM. 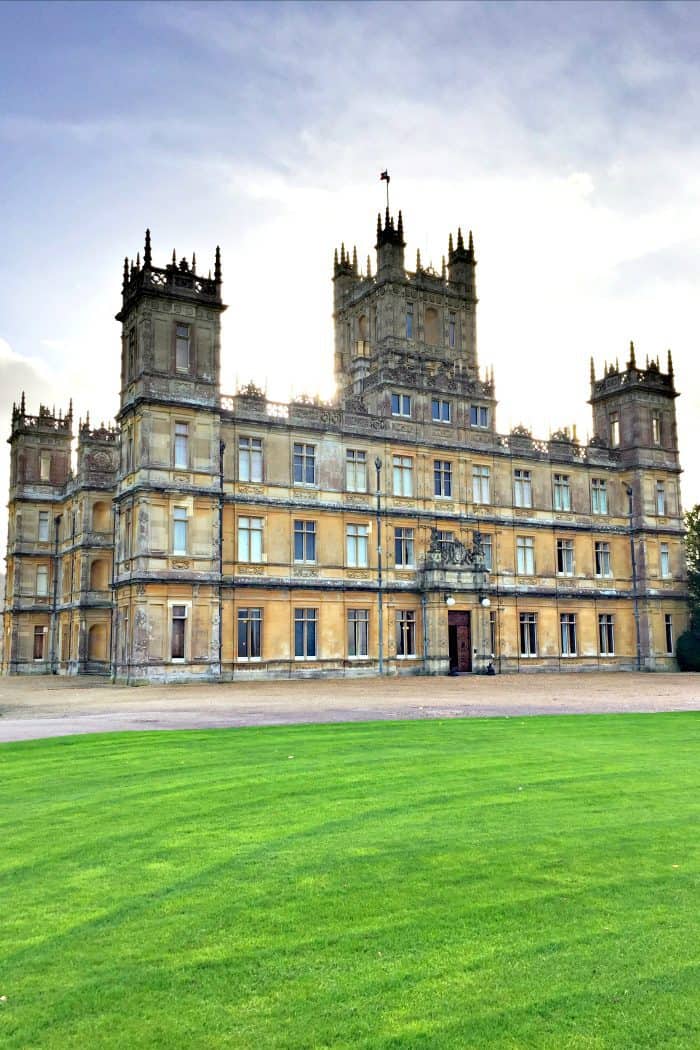 Later this week we are scheduled to visit The Downton Abbey Kitchen, presented by Grey Poupon, to take part in amazing stops to locations featured in the film. That’s right, we get to experience Downton Abbey (Highclere Castle) in person this week! I’m so excited.

Most of you know that this this is the last season of this wonderful show, premiering January 3rd in the US. It will be hard to say goodbye to some of my favorite characters. And by the way, the UK launch was in September, so I’m pretty sure none of the cast will be there when we are.

Staying at the Ritz.

But, still, we’re staying at The Ritz London Hotel! Remember Alfred Nugent, who flirted with Daisy? He was O’Brien’s nephew, who arrived at Downton Abbey in 1920 after Alfred’s mother wrote to her sister, asking her to help find Alfred a position there. He worked as a footman, but eventually left Downton to get a job at the Ritz. 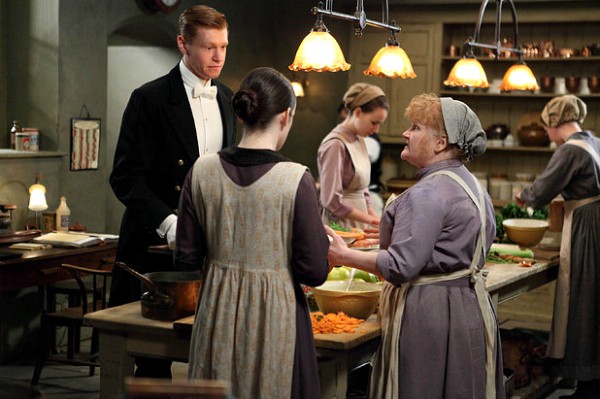 How fun would it be to pass Alfred in the hallway at the Ritz … I’ll let you know … (hee-hee). We head there on Wednesday! 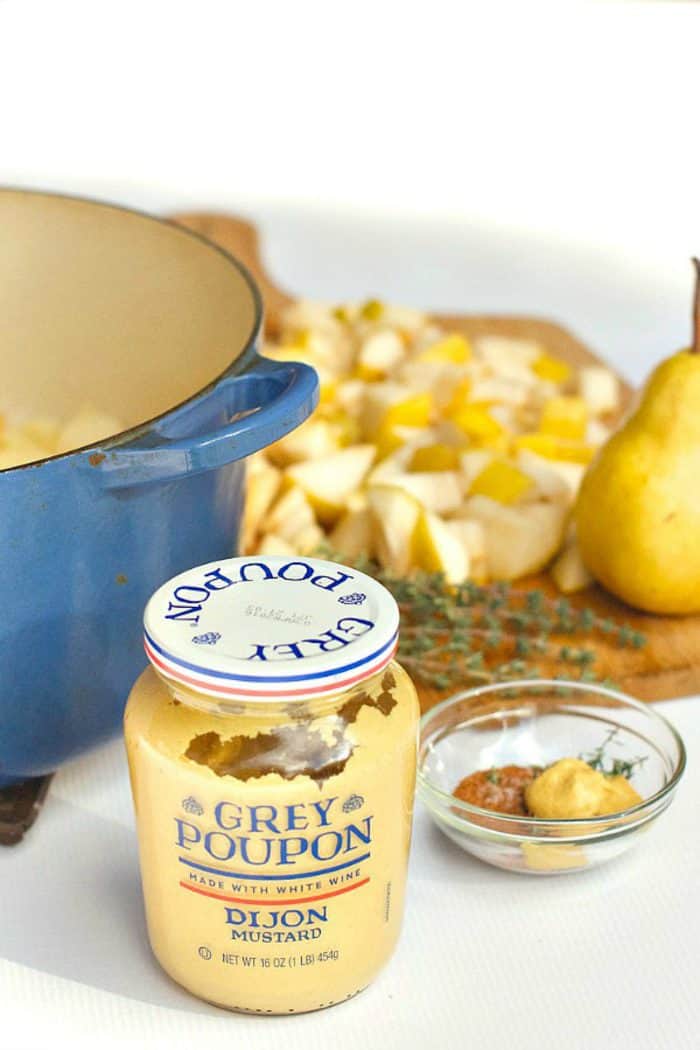 Since we’re hosted by Grey Poupon, I’m starting off the holiday season with a delicious recipe inspired by Downton Abbey that I created last week in my own kitchen, that I think you will love. This Easy Pear Potato Soup Recipe is very simple, made with pears and potatoes, yet it has so much flavor, with the sweetness of the pears, and the irresistibly savory flavor of Grey Poupon mustard, topped off with fresh, sweet thyme and a splash of creme fraiche.

Actually in London last evening, I enjoyed a meal and they served a pear potato soup. I asked, by chance, if they used Grey Poupon mustard? (wink-wink) 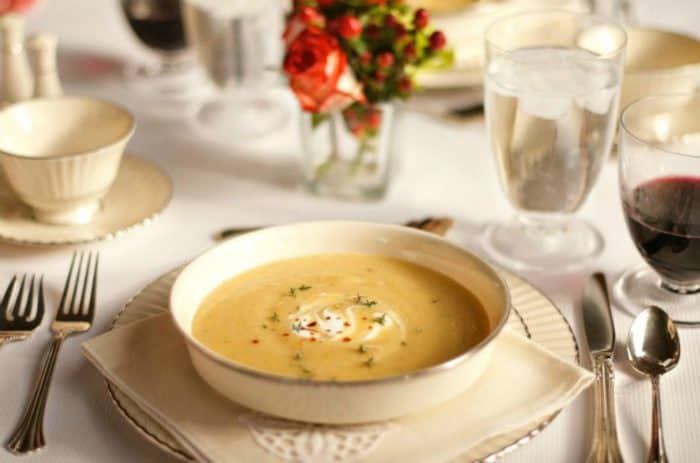 Pull out the China, and serve to your guests for the holidays!

In true family style, my sister came over last week and cooked in our kitchen, making this delicious soup. Great food has a history and connects us with our past, so we talked a lot about our Grandma Friesen, how she always made potato soup. In fact, my dad and his wife Ginny then came over and enjoyed lunch with us! 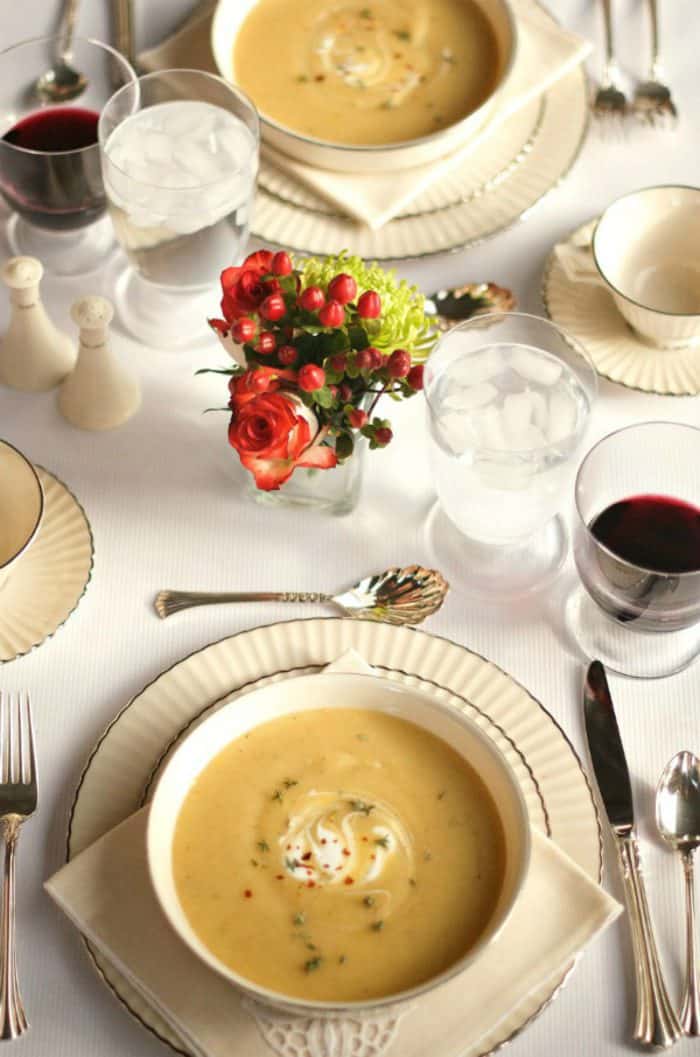 Oh, and we’re also visiting the Victoria & Albert Museum, and heading to Bampton to tour the Downton Village, and then to Highclere Castle (be still my heart), for a tour and high tea.

So friends, if you’re excited like I am, getting ready for Season 6 (and the finale), here are more amazing Downton recipes for you to enjoy. 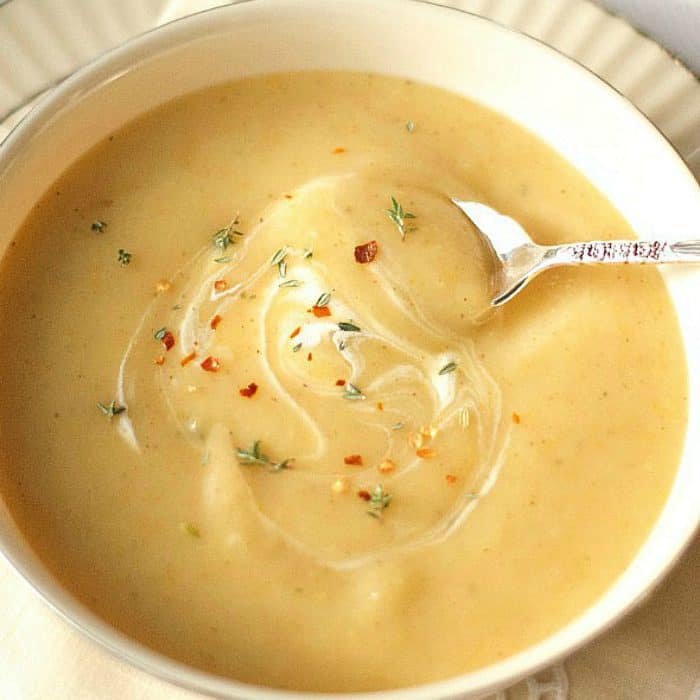 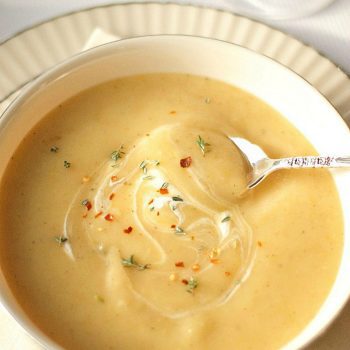 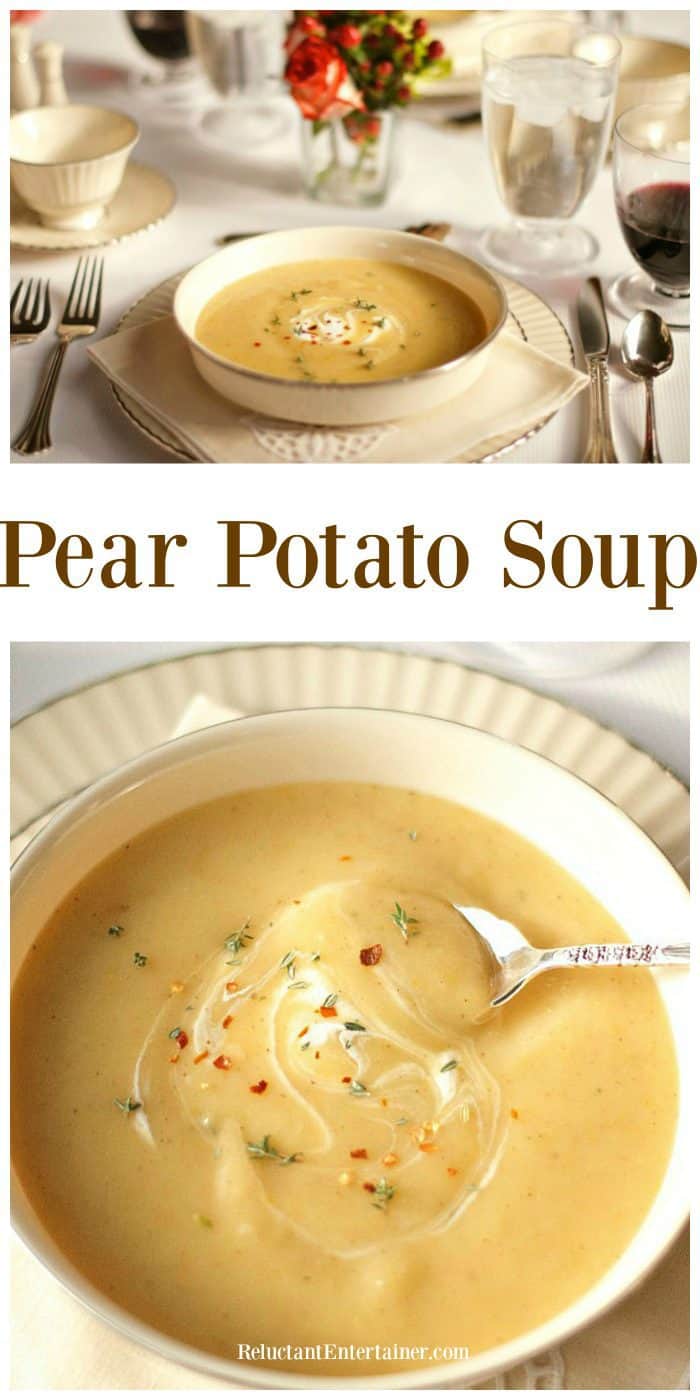 This post is sponsored by The Downton Abbey Kitchen and Grey Poupon, who also arranged for my travel. We use Grey Poupon in our kitchen; as always, all opinions are my own. 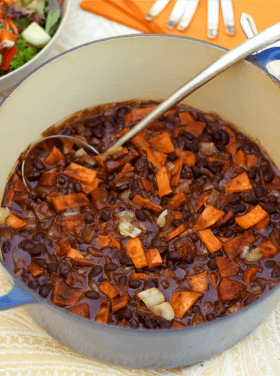 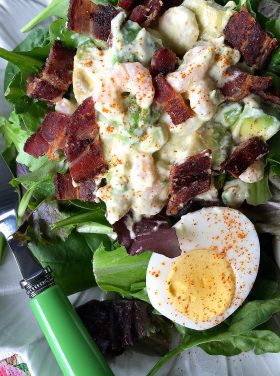 Woodburn Tulip Festival with Green Salad with Shrimp and Avocado 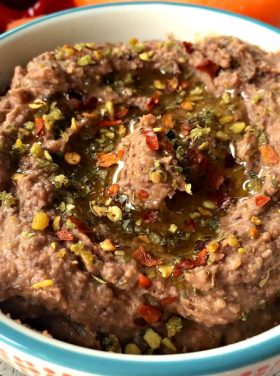 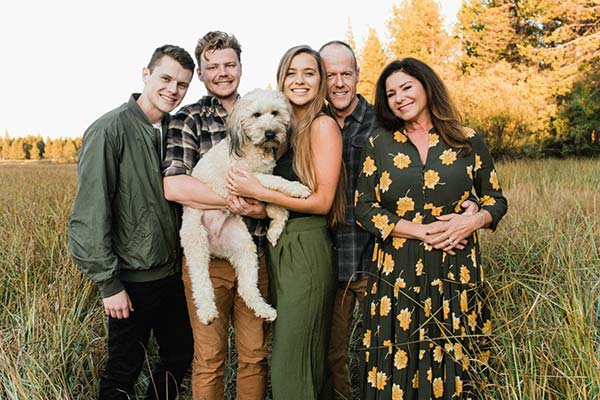 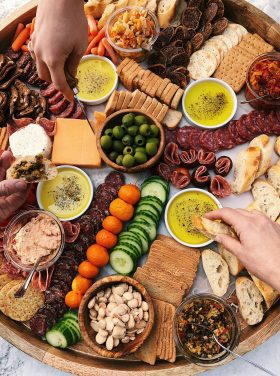 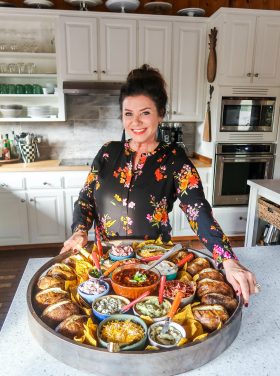 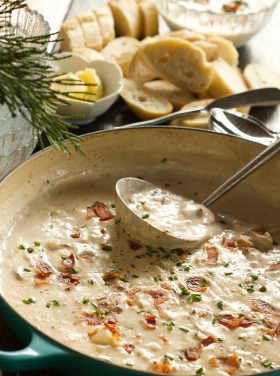 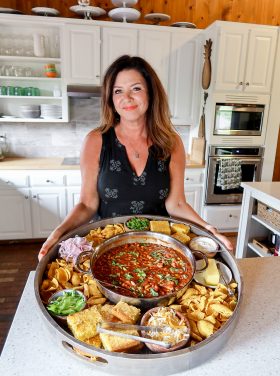